‘I have it on good authority that this duo is formed of stellar talent, and by all accounts their live performances burst with energy. But Sonic Citadel sticks around for too long on the same idea for the effect to carry over here.’

Don Henley in the Park

As noisy duos go, I’ve always found Lightning Bolt to be quite frustrating. They’re an outstanding live outfit which, in my opinion, always struggled to transmit their energy onto recordings. Unfortunately, Sonic Citadel suffers from the same issue, though it does introduce a new side to the duo that makes for a refreshing change of pace.

There are moments of variety and, surprisingly, some standout melodies. Brian Gibson’s bass guitar still sounds monstrous, and Brian Chippendale’s drumming is as frenzied as ever, but they also dial it down for “Don Henley in the Park”, which essentially plays out like an indie-folk ballad. It’s an adjustment for sure, but a welcome one.

Furthermore, the likes of “Air Conditioning”, “Husker Don’t” and “Bouncy House” all contain elements of much poppier rocker music. Weirdly, it kind of suits them. “All Insane” even goes as far to include memorable vocal melodies too.

My main grievances are when Lightning Bolt go the other way towards their traditions of being as explosive and rabid as possible. “Van Halen 2049” is surely an exhilarating experience to see performed live in the flesh, but the nine minutes of carnage doesn’t translate too well on Sonic Citadel, and makes for a grating conclusion. It ends on a somewhat sour note, tarnishing an otherwise enjoyable album, and probably one of their best to date.

My favourite thing about the album is how angry it made Andrew.

Favourite tracks // Don Henley in the Park ­­All Insane

Full disclosure: noise rock is not an area of music I frequent often. Lightning Bolt’s latest album gives me no desire to explore it further. I have it on good authority that this duo is formed of stellar talent, and by all accounts their live performances burst with energy. But Sonic Citadel sticks around for too long on the same idea for the effect to carry over here.

While I can certainly see how much of this atmosphere would transfer to a noisy, sweaty gig experience, by the midpoint of “Air Conditioning”, not ten minutes into the tracklist, my patience has already worn thin. It’s a track indicative of many on the album: vocals crushed so heavily they’re near unintelligible, there’s little more to say besides the fact they’re not the worst part of the proceedings. Brian Chippendale’s drumline is likely stonking throughout, but pushed down below the bass line it’s often turned into little more than an incessant snare drum, the remainder smudged into the surrounding fuzz. Brian Gibson’s bass work is technically excellent, but most tracks sit on an idea too long. Closer, “Van Halen 2049”, takes the biscuit, just shy of ten minutes and largely confused, structureless and ultimately dull.

Where usually I could see a good album even if it’s outside my tastes, Sonic Citadel irritates me too much for me to do so. Even the band’s 2003 release, Wonderful Rainbow, features some semblance of structure and development across tracks to build a record. Sonic Citadel instead leans into the grubby, raw, jam-like nature of their live performance, records it, and calls it a day. “Big Banger” sits whirring and whirring for five minutes without much payoff, and having spent a quarter of an hour listening to essentially the same pace and urgency, I’m numb to the effect. This was a further turning point for me where I found it hard to resist skipping through the album to work out whether anything changes.

Two tracks surprised me, however. “Don Henley in the Park” breezes out of nowhere, and while it’s far more to my liking, it’s so out of place it’d be grating if it weren’t for the rest of the album overshadowing it. I wouldn’t expect more of this kind of thing from the duo, but it certainly made for a nice change of pace and respite from all that surrounded it. “All Insane” also made for a breath of fresh air, featuring structure, a noisy but well-placed bass and intelligible vocals and drums, it’s a scrappy rock track.

Ultimately, attempting to provide an opinion on a genre of music I’m not familiar with is always going to end badly and lead to off the mark opinions. But from what I’ve seen of Lightning Bolt and their contemporaries, I still don’t think Sonic Citadel is the best in class. They’re clearly an excellent, talented live outfit, but this album appears to be an attempt at recreating that atmosphere and it simply hasn’t worked. I’ll certainly remember this album, but it’ll likely be as an album that left me apathetic, irritable, and bored.

Favourite tracks // Don Henley in the Park ­­All Insane ­
2010slightning boltrocknoise rock
Receive monthly roundups of what we’ve been up to. Sign up for our newsletter ➔ 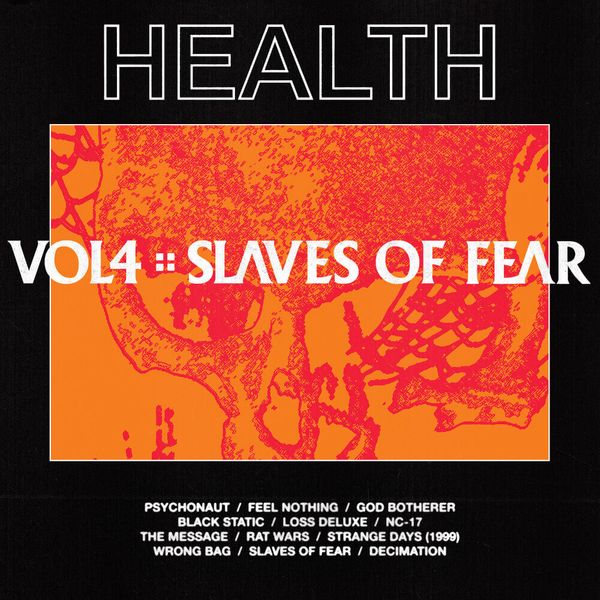 HEALTH have continued their trend of making exhilarating music, but something feels off this time round. A record this polished shouldn't feel so flat.