‘El-P and Mike may have been fighting for the cause before, but now they're on the frontline. On RTJ4, the duo stand up to be counted for what they really are: rappers, producers, activists, husbands, citizens.’

walking in the snow

El-P and Killer Mike are back, and boy did we need them. Almost four years on from their last release, Run the Jewels return with their most politically and socially charged project yet. The hardcore hip-hop duo have been riled up since their 2013 debut. Now, they've finally reached boiling point. RTJ4 is utterly explosive, comprised of powerful anthems demanding immediate change. Never does it feel preachy, however. Much like the rest of RTJ's catalogue, this is as fun as it is combative, and its this balance that makes the duo stand out from the crowd. Whether you consider RTJ4 to be their best yet will depend on preference (this is more focused yet less diverse than RTJ2) but this is the release that likely cements RTJ's status as one of the most crucial acts in hip-hop today. There's a revolution coming, with El-P and Mike leading the charge.

“yankee and the brave (ep.4)” sets the tone immediately, and aside from a smooth detour with “ooh la la”, RTJ4 never lets up from there. Banger after banger after banger. Much has been made of Mike's poignant words, particularly the haunting 'I can't breathe' line on “walking in the snow”, and rightly so. He's arguably enjoying the best spell of his career, hungrier than ever. His presence is both stimulating and assuring. Part of what makes RTJ so special is the dynamism between Mike and El-P; not just on rap terms, but production too. On that front, this is perhaps El-P's finest showing yet. “holy calamafuck” features a heart-stopping beat change, “goonies v.s E.T” is a delightful diversion that homages Prodigy-style techno and breakbeat, and the closing track builds to a stunning climax enhanced by robust strings and a stirring saxophone. RTJ4 isn't flawless, but its final moments are something to behold. A true masterstroke.

You sense that RTJ have grown to be more serious, and less absurdly silly. The punchlines here are less juvenile than usual. Presumably, this is from a mind of duty and commitment to justice. Play-time is over. Things are serious. El-P and Mike may have been fighting for the cause before, but now they're on the frontline. On RTJ4, the duo stand up to be counted for what they really are: rappers, producers, activists, husbands, citizens. Their hope is to inspire a new generation to rise up against tyranny and achieve social, economic and racial justice. History has taught us that music has the power to inspire the best in us, and if RTJ can't rouse and rally a change in our culture, then I'm not entirely sure who can. This is cause for optimism in spite of prejudice. The best part? I'm almost certain that our beloved hip-hop duo are capable of even bigger and better things than RTJ4.

Listening to RTJ4 is like clinging to the side of a runaway freight train - what else can a man do but shrug his shoulders and enjoy the ride? Fast and very, very furious is the name of the game, and while it would be easy for an approach like this to burn out, here it simply feels relentless. Bish bash bosh, cut the bullshit and thank you very much ladies and gentleman.

As far as I can tell this is not a reinvention, just the continuation of a good thing. When the good thing is this good that’s fine by me. From the old-school “ooh la la” - wind up the beat and watch it flow - to the depressingly timely “JU$T” just about all the songs have the rumble and purr of an impromptu performance. “the ground below” is a favourite of mine, but it’s all good stuff, fun but never frivolous. Collabs sit neatly within the larger picture and by the end of the album’s fairly terse 39-minute runtime it’s fair to say one’s pretty hyped.

It’s an adrenaline boost, red-tinted and at times razor sharp. The album doesn’t have the elegant curves of, say, To Pimp a Butterfly or Channel Orange, but it would lose an awful lot of itself if it did. RTJ4 comes in guns blazing… and goes out guns blazing. I don’t think I’d have it any other way.

Favourite tracks // the ground below walking in the snow JU$T

Run the Jewels return with their fourth outing at a time where their continued push for societal change and the injustices it fosters could not be more relevant. RTJ4 delivers a sharp poignancy in everything it has to offer.

Most of this tracklist is unapologetically politically charged, from opener "yankee and the brave (ep. 4)" which leads by taking aim at politicians and the elites of society to "walking in the snow" which deals with discrimination, police brutality and an ominous theme of "First they came…". Pharrell Williams and Zack de la Rocha join in on "JU$T" to highlight the injustices that still exist in the modern capitalist world, with Rocha making a political call to action in his closing verse. Mavis Staples contributes a meaningful, conflicted chorus in "Pulling the pin" while El-P and Killer Mike themselves pack meaning into every verse of their own across the album.

With that dominance on lyrics, it'd be easy to think that instrumentals take a back seat. While RTJ4 is certainly less bombastic in its beats, there's some clear musical highlights here. Lead single "ooh la la" is still an earworm, harking back the '90s golden era the duo witnessed and "JU$T" has the familiar hallmarks of a bouncy Pharrel project despite him not appearing in the production credits. "holy calamafuck" makes for a definite highlight in the tracklist, swapping its pacey percussion for a deep, subby beat switch mid-track. Elsewhere, Josh Homme leaves his mark on "pulling the pin", with its heady, atmospheric, grand instrumental lined with wailing guitar stabs.

The duo leaves listeners with a mighty closer, reflecting on their journey and making a statement of intent moving forward as activists and musicians while incorporating jazz and strings into a grand instrumental. RTJ4 still has the humour and quality of past releases, but much of the zane and frivolity has been replaced with a sincerity that reflects the climate it was produced in. Given their parting comments, it's clear that they have more to say, and given their already laudable longevity, I'm quite sure we've not seen peak RTJ just yet, with each studio album excelling in its own, fresh way. A poignant album that deserves multiple listens.

Favourite tracks // holy calamafuck JU$T walking in the snow
2020srun the jewelship hopthe prodigykendrick lamarfrank oceanqueens of the stone age
Receive monthly roundups of what we’ve been up to. Sign up for our newsletter ➔ 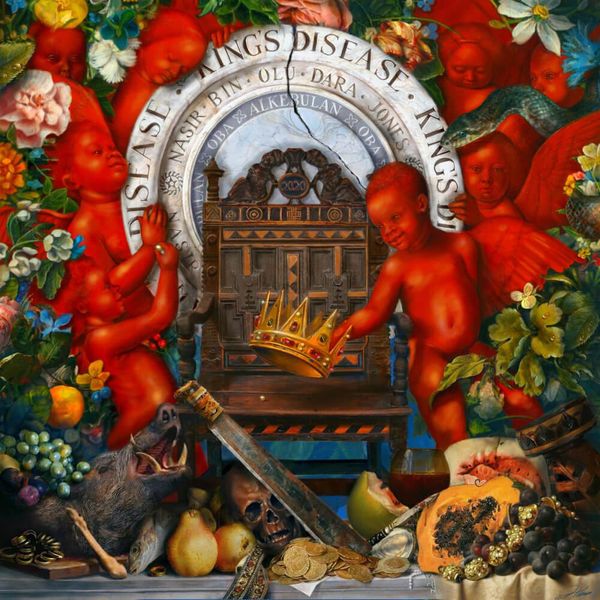