Over the last year and a half I have probably heard more of Thomas Ashby’s music than anyone else in the world. I haven’t had much of a say in the matter, but that’s all right. I’ve liked it. Until a month ago we shared a flat in London, during which time Tom recorded and released an EP called Backlash.

He being a musician, and I being cofounder of one of the world’s most prestigious music websites, we agreed an article was in order. So here we are. My approach has had to be a little different here, though. Read a handful of my review summaries and you’ll notice I don’t have trouble speaking dispassionately about music. I’m a pretty dispassionate guy. But this is different. I was there, and I don’t trust myself to be impartial. So instead of talking too much about Backlash itself, I will try to share what it was like ‘backstage’ while Tom was putting it together.

You can say a lot of things about Thomas Ashby (and I have, you can ask him) but his passion for music is a gift. He is a true student of his craft; always writing or recording, always learning, seldom satisfied. He had two EPs and an album to his name by the time we crossed paths, and it quickly became clear he already viewed them as stepping stones. Meaningful stepping stones, but stepping stones all the same.

Backlash is more engaged with the outside world than Tom’s previous projects. Most of the songs — or at least the skeleton of the songs — were written about two years ago, after he moved to London to study. ‘I think anyone living in the western world would find it hard not to be aware of the shift in politics and attitude at that time,’ he says, ‘and I think the EP went in line with that.’

Not that Backlash is an activist record. Listen to it and that much is obvious. For Tom it was more a case of looking outward and responding to what he sees. That’s the main business of the EP, and rather than spending its time complaining, it explores the good that can come out of having to climb out of bad situations. There are elements of that in all five tracks, but I think it’s especially true for “Look Up” and “Capitalize”.

‘That’s the idea of it,’ he says, ‘to take these situations which could be quite alarming or upsetting or anxious and showing the light at the end of the tunnel.’ Tom has said he wants the album to have longevity, and I think time will show he’s achieved that. Rather than taking stands on specific issues, Backlash is more about the desire to respond to difficult circumstances with positive action, and so actually channels something far more universal. 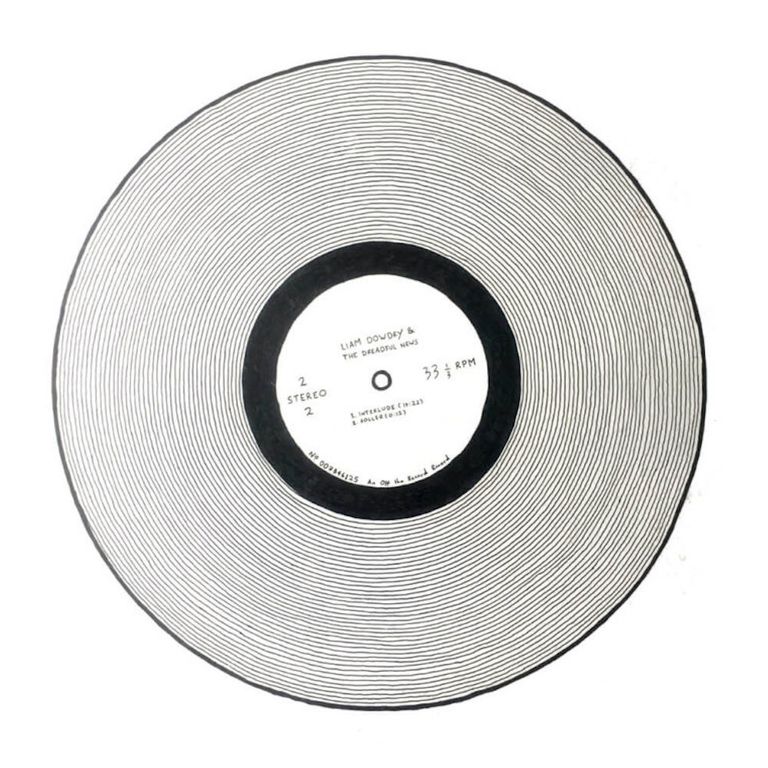 ‘It’s trying to focus on the positive reaction. Whatever situation you may find yourself in personally, or you may find it hard to relate to politics or what’s going on around you in your community, there is a hope that something good can come from it, even if what you’re currently in is bad.’

It’s quite a simple shift, really. His early projects are more introspective, whereas this time around he’s more tuned in to the world around him. That’s reflected in the music on Backlash, which is why I think Tom’s proud of it, and should be.

That sense of opening up extends to other aspects of the EP. Tom’s time at our flat in London was the first time he could really spread out and record demos in a bigger space than a bedroom. For most of our time together the flat’s living room was kitted out as an ad hoc studio. This gave Tom more room, naturally, but it also gave him the option of having people come over to play.

Many a time I came home to violins or trumpets or harmonies. Tom seized the chance to experiment with song arrangements, a luxury he didn’t have with his debut album, Cache. ‘Just jamming through things live is hugely important, which with Cache wasn’t possible until all the demos were created. Backlash was more of a shared vision.’

I think that comes across. Backlash is a more stripped down project than Cache, but the sounds that are there sound more deliberate, and more cared for. Tom has learnt that restraint can be as important as expression. ‘Space and silence is as important as noise and sound.’

This came to a head during the EP’s recording, which took place over a weekend at Big Jelly Studios in Ramsgate. Tom’s preparation left him ready for the narrow window. After his experiences making Cache, which he describes as something close to manic, he felt more comfortable this time round.

I wasn’t there for the recording, but I still remember how elated Tom was when he came home. You don’t get that kind of buzz when you fluke something. Tom went into Backlash knowing the songs were ready, believing in the people he was making it with, and trusting himself to meet the occasion.

Anyone who knows Tom can vouch for his warm, stoned teddy bear character, but like most musicians he’s deeply protective of his work. He’s removed some of the armour while making Backlash. I think that’s a good thing, and I’m sure he’d agree.

The same was true outside the music. I was a bit of a fly on the wall for the musical side of things, but I wound up having a lot to do with the EP’s artwork and music videos.

For videos Tom had a vague idea of one stage being used in all his videos. As we talked about it we settled on the idea of a miniature wooden frame which he could build ‘sets’ for. We designed and built it together, then shot the videos together.

“Look Up” came first, which I still think is a brilliant concept. Though it’s Tom’s hand that stars in the final video, it was mine that set them off for all the loops. Tom, typically, moved the cradle almost every time he touched it. He did some fine directing though, and bless him, he edited those hundreds of loops together himself.

Then there’s the video for “What I Expected”, which was inspired by the forced perspective scene in Eternal Sunshine of the Spotless Mind, one of Tom’s favourite films. There’s no green screen business; just stop motion and lots and lots of takes. Tom has kindly sent over ‘behind the scenes’ footage so you can see how he set it up:

The artwork was a series of happy accidents. Tom took a liking to an ink drawing I did of a made up vinyl record, where the groove was a single, uninterrupted line. ‘I think the kind of timeless feel of that artwork is what connected with me,’ he says. ‘In a lot of ways it goes back to the roots of what music was for a lot of people, how people listened to it and interacted with it.’He asked if I’d make one for Backlash, and I obliged. He likened the design to a Batman symbol when he first saw it, but he’s warmed to it since.

My design didn’t feel right to either of us until Tom spent an evening making a handful of wild, unplanned paintings. All broad strokes and instinct. When he overlaid my line drawing over one of the paintings, we knew we had it. We wound up being bullied by Apple Music and Spotify into making variations for each song, but we’re glad we were now. It feels like a complete set, and very much aligned with the spirit of the EP. The meticulousness of the lines with the wildness of the paintings sits right with both of us. It’s probably quite a good visualisation of life in the flat, now I think of it.

For Tom, it ultimately connects with the music. ‘Without necessarily intending to, I think it says a lot about the EP in that there’s been a huge amount of thought that’s gone into it, but there’s also been that emphasis on an organic relationship between each player and the music.’

All this amounts to something that feels very complete. There’s a consistent tone running through the music, its videos, and its artwork. Even the website Tom made for himself while he was here fits with the overall project. ‘I feel it has more purpose,’ he says, and that feeling has rung true since he started gigging with the material. 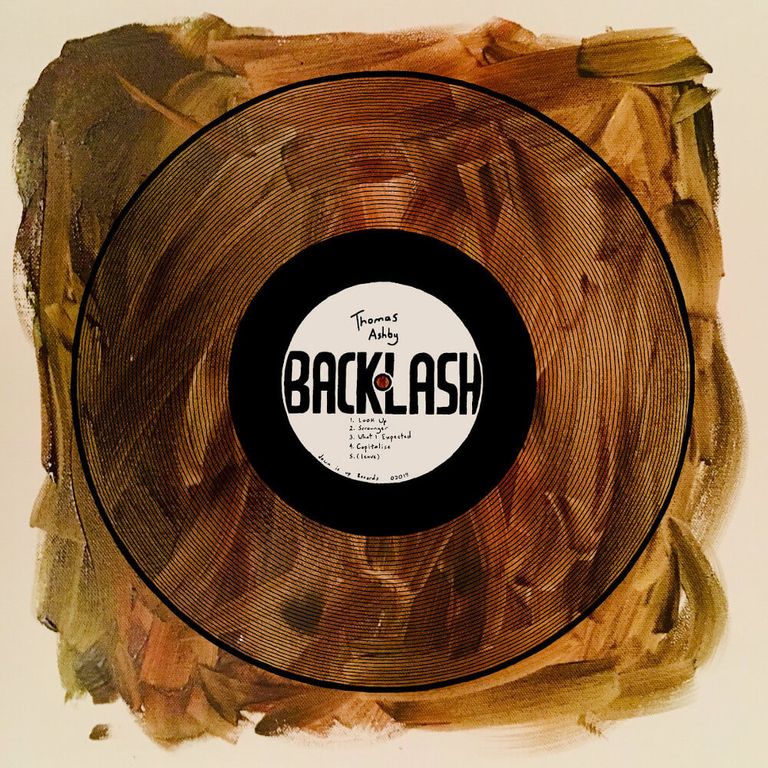 ‘These songs had a good purpose to be sung at gigs, and I’ve had people react to things at gigs. That was really rewarding, to know it engaged with people that way, more than just singing about heartbreak or singing about a lovely moment I had travelling.’

On the outside looking in, that seems to me the greatest triumph of Backlash; it’s the result of Tom opening up in ways he hasn’t really done before. From writing to gigging to production to artwork, the music is still his, as it will always be, but he has shared a great deal to make it happen. In making the EP less about himself, he’s actually made it his most personal.

Tom’s gone now. He’s still alive, he’s just moved out. He’s out in the world again, which is where he belongs. Despite my best efforts to break his spirit, he seems in a pretty good place going into whatever’s next. (Spoiler: it’s an album.)

I’ll miss the noise. The co-writes, the bullshitting, the homemade curries, the sound of his guitars falling over with an inevitable melodic clang. Thomas Ashby is a whirlwind, but when it comes down to business he doesn’t hold back. He’s the world’s problem now, and I hope he makes a beautiful nuisance of himself.

thomas ashbyacousticfolkblues
Receive monthly roundups of what we’ve been up to. Sign up for our newsletter ➔